Feeding the future - ICT and agriculture In the foreword of a report in 2013, the then Assistant Director-General of the Food and Agriculture Organization of the United Nations (FAO), Hiroyuki Konuma, said information and communication technologies (ICT), along with other developments like GIS and precision farming, were the world’s “arsenal in the fight against hunger”.

According to the FAO, the world will need to increase food production by an estimated 60 to 70 per cent to feed more than an extra nine billion people by 2050. Konuma identified several “existing and foreseeable” constraints to achieving this, from scarce water resources and environmental degradation to emerging diseases and rapid urbanisation.

ICT in Agriculture, a website set up to capture and disseminate research on the subject, says there were six billion mobile phones around the world in 2013. Of those, 75 per cent were in developing countries. “Networks across the world are being upgraded to higher speeds and capacities, and devices, too, are becoming more sophisticated. As such, calls and SMS are increasingly being augmented by more advanced apps and services, including mobile video transmissions,” it says. 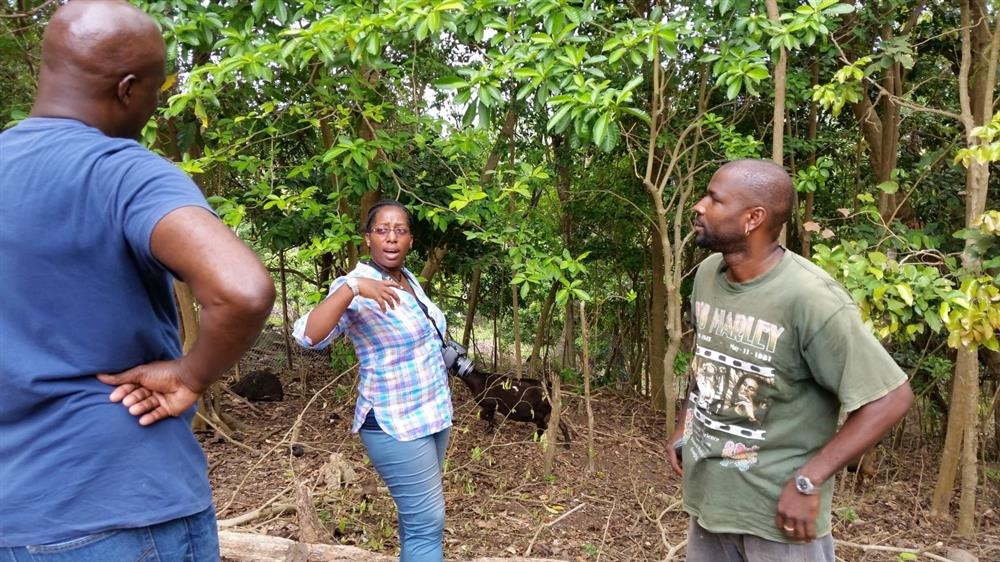 On St Lucia many family units are in back areas away from road access to avoid dog attacks.  Fields are fenced both to keep dogs out and goats in.

In the Caribbean, Prime Consulting International Ltd is developing the region’s small ruminant (goat and sheep) sector, as a way of contributing to rural economic development and local food security, and ICT has a major role to play. The two-year project is funded by the New Zealand Ministry of Foreign Affairs and Trade’s New Zealand Aid Programme and is being implemented in association with the Caribbean Agricultural Research and Development Institute (CARDI), across CARICOM countries, starting with Jamaica, Dominica, Grenada and St Lucia.

According to Dr Chris Asby, the technical team leader, the Caribbean was mined for aluminium ore by large offshore companies for many years, but when commodity prices collapsed from 2010, many of the islands’ economies collapsed. This was compounded by hurricane disasters and, in the rural sector, the collapse of breeding programmes for Jamaica Hope cattle as well as small ruminant disease problems from the importation of exotic breeds.

“The project is really about increasing the base population of better quality animals and then increasing productivity by using better husbandry, management and marketing,” he says. “It’s all medium to small-style stuff. If you have 35 breeding animals you are doing really well.”

Dr Asby says Caribbean people were early adopters of internet and mobile telephones due to time and cost barriers (it's expensive and time consuming to travel between the islands) and poor service from fixed lines. They are increasingly communicating with each other using internet-based mobile services such as voice-over-internet-protocol (VOIP) and social networking apps. Telecommunication companies are continually trying to upgrade their services and give customers better value as there’s no monopoly. They enjoy excellent broadband speeds and a lot of people have smartphones. In others words: “It’s an ideal place for a distance learning approach.”

Prime and CARDI intend to utilise Moodle, a global open-source e-learning platform, to share PowerPoint presentations, digital video training sessions (pre-recorded and live streamed) and other content with farmers, farm extension advisors and Caribbean agricultural students. They will learn about how to improve their skills and knowledge and run profitable goat and sheep farming enterprises and will be able to complete units as part of a certificated course. 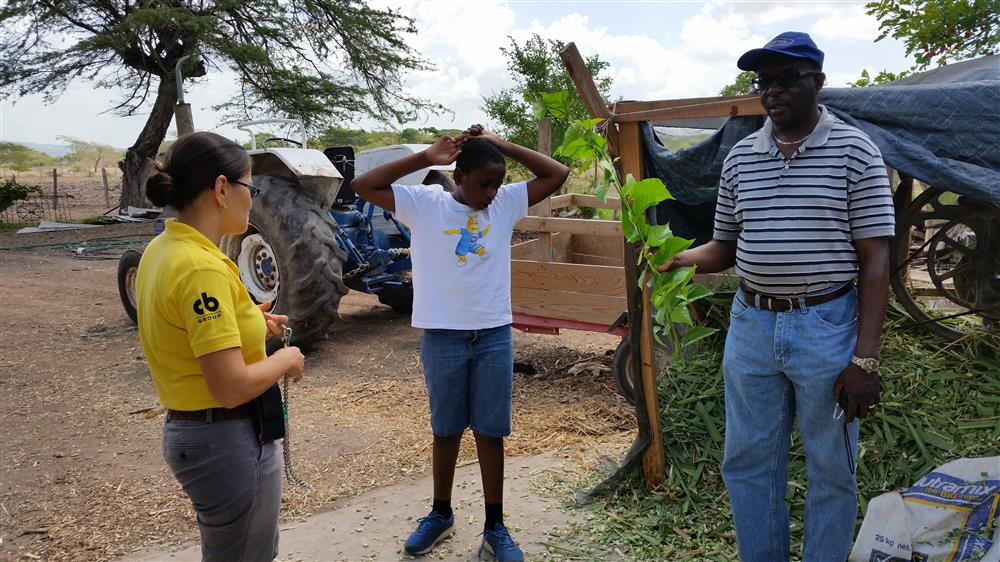 Albert Fearon and his son giving advice on goat nutrition while visiting a small farm owned and run by a local veterinarian.

A team of people from the Department of Computing at the University of the West Indies (UWI) are also developing an app to give small ruminant farmers easy access to market information and to track stock movements. “It’s sort of a TradeMe site for goats and sheep. We call it a virtual bazaar,” Dr Asby says. In future, the app could be extended to allow farmers to report stock thefts, which are extremely common around traditional feast times. “It makes sense to record where goats and sheep are, who has got them and whether they have disappeared or not.”

Prime director Dr Alan Pearson says less developed countries are often better-placed to embrace new technologies at faster speeds than more developed countries, because often “there’s no vested interest in not changing. There’s no copper wire in the ground to defend, no legacy thing to replace”.