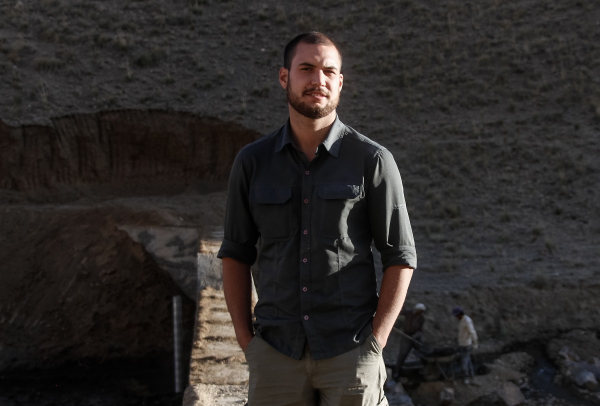 Alpha Kennedy was just 20 when he arrived in Afghanistan in 2009 to lead up to 35 people in the field as a Patrol Commander with the International Security Assistance Force. Now, just a few months shy of 30, the New Zealander is a husband, father, MBA candidate and Director of a global company specialising in international development. We spoke to Alpha about his transition from the military to the work he does now.

How old were you when you joined the New Zealand Army?

I joined the Army straight out of school. I wanted to follow in my Dad’s footsteps. He was a Warrant Officer Class One in the New Zealand Army and had an office full of memorabilia – places he had been, experiences he’d had and recognition plaques for his efforts. He is my idol and has always encouraged me to set goals and work hard. I was 18 when I started Initial Officer Training.

How long were you in Afghanistan as part of the International Security Assistance Force?

I deployed to Afghanistan in April 2009 for just over six months. I was a Patrol Commander based up in the north-east of Bamyan province. The size of our patrol varied over the course of the tour from 14 to 35 people. The most professionally satisfying part of the tour was the opportunity to work with talented and committed men and women across a very diverse set of activities. We supported the Afghan National Police forces to maintain security, provided mentoring and resources to the district governors to support their ability to serve their people and also identified and implemented rural and district-level development projects. Alpha at work in Bamyan, Afghanistan.

Why did you leave the military and return to Bamyan as a civilian?

Leaving the military was the hardest decision I have ever made. I loved my job and enjoyed working with such motivated and hardworking people. But in the end it came down to a feeling that I still had more to give to Afghanistan – that the mission there in Bamyan was not finished. Fate would have it that I would run into another Kiwi, Karl Maddaford, who had just returned to New Zealand following a deployment to Afghanistan with the United Nations. We both had strong ideas about better supporting Afghanistan, centred around using infrastructure as a medium to build local technical capacity. So we set up a company together – International Strategic Development Solutions – and got to work, starting with the Bamyan Renewable Energy Project.

What were some early challenges in your transition from the military to work as a civilian?

In the military you have a unity of effort towards a clearly defined goal. In an ideal world, development should work the same. Unfortunately, the development sector is largely fragmented with different actors working to their own agendas often at the expense of others. Navigating this complex web required a big mindset adjustment and a healthy dose of patience. What we need is for the various donors, NGOs, governments and development companies to understand that we are all in the same global waka and the sooner we paddle together the further we will go.

I lead Prime’s day to day activities in the MENA region, which also includes Afghanistan. I guide Prime’s response to risk management to ensure its people can achieve their outputs as safely as possible.

Two things stand out. I like the focused commercial approach that Prime brings to development programmes. We really drill down to what’s important, define what that looks like for programme participants and share a unity of effort towards that outcome. I also like how I get to work with a dynamic and capable team from such diverse backgrounds. I learn something new every day.

Alpha inspecting a check dam in Bamyan, Afghanistan in 2014.

What skills do you still use today from your time in the military?

The military ‘appreciation process’ is something I use every day. The ability to plan quickly and accurately is critical if you want to be successful. There’s also the ability to work as part of a team but also to lead and guide the programme along; the idea that a leader should lead from the front – who is not afraid to get stuck in and dirty, but who will also eat last making sure that his/her team is well looked after. And the ability to empathise with others, put yourself in other people’s shoes and see what really matters to them. Certainly, having a military background also allows me to effectively evaluate risk and affords me the confidence to work in challenging and sometimes hostile environments.

What do you see as the benefits and importance of both fields of work?

I think in a rules-based society the military plays an important role in providing the stability that enables growth to take place. For me, international development is about working to unleash that hidden potential, be that human growth, economic growth or technological growth.

Do you believe development work can succeed in places where there are ongoing security issues?

Development cannot take place when there is only chaos. That said, I do not believe you require conditions completely devoid of violence for development to occur, rather you need a group of people with common aspirations for a better life and a willingness to do something about their situation.

How do you tackle donor dependency?

It’s a relationship and in a relationship, there has to be quid pro quo. It can’t just be give, give, give and take, take, take. There’s a need for local communities to have skin in the game and contribute to their own development. Donors must also recognise that there comes a time when aid starts to become a negative incentive. It can create inefficiencies in the market – much in the way subsidies can. Donors should not be afraid of transitioning themselves out. Can you tell us about your Māori roots and how you incorporate Māoritanga in your work?

I am from Ngāti Ruanui, Te Āti Awa, Ngāti Maniapoto and Ngāti Kahungunu. My mother’s family was from Ratana, so Te Reo has always been a part of my life. Growing up I became involved in Kapa Haka which I continued through school. It took me to China with Ngā Taonga Mai Tawhiti and senior nationals. Having that Māori connection is important. Those roots give me tūrangawaewae, a place to belong, which gives me confidence to face the work I do and seek out challenges. That iwi connection is particularly useful working in Afghanistan, which has a deeply tribal culture. It helps me understand why people might think and act in a certain way.

How did it feel to become a Director of Prime and a father – all around the same time?

I feel very lucky and grateful to become a father and to have Prime see value in what I can contribute. Both events are massive. I just feel lucky that I can contribute and have such a supportive family. Big shout out to my wife, Libby, for the sacrifices she makes and the support she gives to me to enable me to contribute to others.

Have you had any leadership training or is it something that comes naturally to you?

I’ve had such good role models in my life – from my father and instructors through the military, to my Company Commanders, first business partner and the other Directors of Prime. Each one has helped me develop along the way.

What drives you to achieve in your work and life?

The desire to make a difference is my big motivator – the need to create value from actions.