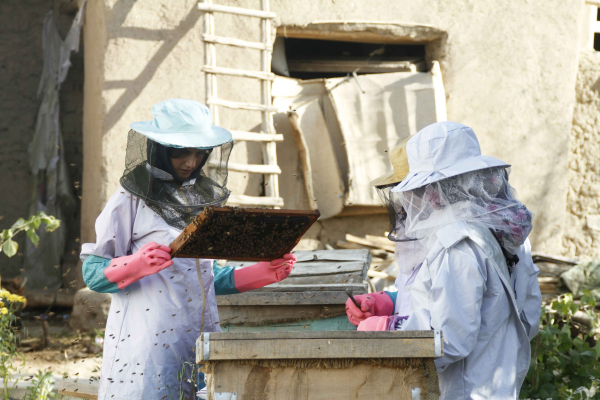 The overall aim of the potato component of the ASP is to improve the production of potatoes by improving agricultural techniques and the market for potatoes. Bamyan is well-placed to produce a large quantity of high quality potatoes due to its high altitude, dry summers and cold winters. Potatoes can be stored longer than other fresh vegetables but they require good quality storage systems.

Construction of the Bamyan Gold packhouse was completed in 2013 and storing and packing potatoes also started that same year. In 2015, ASP improved the storage capacity of the packhouse by installing metal shelves, which prevent damage to potatoes from being squashed or from rot. The stacking of potatoes creates heat build-up inside the stack, which hastens the onset of rot caused by bacterial growth.

A 200-metre long retaining wall was also constructed in 2015 to prevent damage to the packhouse from flooding due to rainfall and snowmelt in spring. In addition, humidity from snow melt in the Bio Climatic Warehouse (BCW) roof was addressed with a new drainage system.

About 300MT potatoes (different varieties) were stored in the BWC in 2015. Routine maintenance carried out included repairs to the BCW wiring system, surface repairs and painting a packhouse wall. Several new purchases were made, including a forklift for unloading potato bags in the BCW, covers for the packhouse office roof and a water well, tank and networking system for all parts of the packhouse.

Between August 2013 and December 2014, during phase one of the BEES (Beekeeping Education Empowerment Sustainability) project, 148 apiaries were established with 273 beehives across two districts (Yakawlang and Bamyan), 25 farming cooperatives and 40 villages. There was a strong focus on female empowerment, with more than 200 women successfully managing hives. The project also employed nine female beekeeping trainers.

The female-led Bamyan Beekeeping Cooperative was established during phase one and a marketing strategy was developed that fed into a business plan for the cooperative, which is now known as the Katakhana Beekeeping Cooperative (KBC). In 2015, during phase two of the BEES project, the ASP distributed 100 new hives and held training sessions across 17 farmer cooperatives. More than 1300kg of honey was produced, providing a total 387,000AFN in income. Of that honey, 1015kg was produced in Yakawlang (5.5kg per hive).

The project also supported the emergence of 14 private beekeepers, with one to 30 hives each. The Bee Products Business operation team monitored bee hives throughout the year, including private ones. The team identified American Foulbrood (AFB) infections on 68 occasions. An integrated AFB mitigation strategy was implemented in Yakawlang, where prevalence of the disease was high. AFB cases now appear to be decreasing.

In February 2015, the KBC was officially registered with the Ministry of Agriculture, Irrigation and Livestock. The management team has since received support in business, finance, planning, management, honey production and quality control. KBC now has an office at DAIL's veterinary clinic in Yakawlang district. In May 2015, the ASP supported the establishment of a honey and wax extraction centre in Yakawlang. The centre is now being used as a site for buying and selling honey.

As part of the ongoing ASP in Bamyan, Prime has upskilled 16 agriculture professionals in partnership with Bamyan University and the Provincial Directorate of Agriculture, Irrigation and Livestock. These professionals work as extension officers to support ongoing development of the sector. The following is a summary of work carried out in Bamyan Centre, Yakawlang, Panjab and Waras districts.

Extension officers have advised about 720 wheat and potato farmers about best practice - from sowing seeds to harvesting, sharing 1000 written guides in the process. They have also distributed 13,258kg of certified wheat seeds and cultivated several potato and wheat trial plots. Six trial plots were used to test the impact of farm mechanisation (tractors) on production, compared to traditional harvesting and threshing methods. Overall farm mechanisation results were much better than those from traditional methods, with fewer chemicals required.

More than 700 hectares of rainfed alfalfa was cultivated to aid rangeland rehabilitation across four districts between 2012 and 2015. ASP extension officers have held workshops on rangeland management and protection covering topics such as sowing methods, site selection, test germination and seed selection. A three-year Rangeland Management Plan has been prepared by a Rangeland Management Committee to ensure the ongoing success of rainfed alfalfa plots. Responsibility for the plots’ ongoing survival and success is shared by individuals belonging to 40 farming cooperatives in Bamyan Centre, Yakawlang, Panjab and Waras districts.

ASP field days are held to demonstrate new and innovative farming methods. In 2015, events were held to demonstrate mechanical sowing of potatoes, how to prepare a soil bed for cultivation with a rotary-hoe machine and how to harvest potatoes mechanically. Hundreds of people attended the field days, including farming cooperative members, NGO representatives, students and lecturers from Bamyan University, staff from DAIL and villagers. Another event was held to showcase the rainfed alfalfa site in Panjab district.